Australia: “The Darkest Place on Earth” 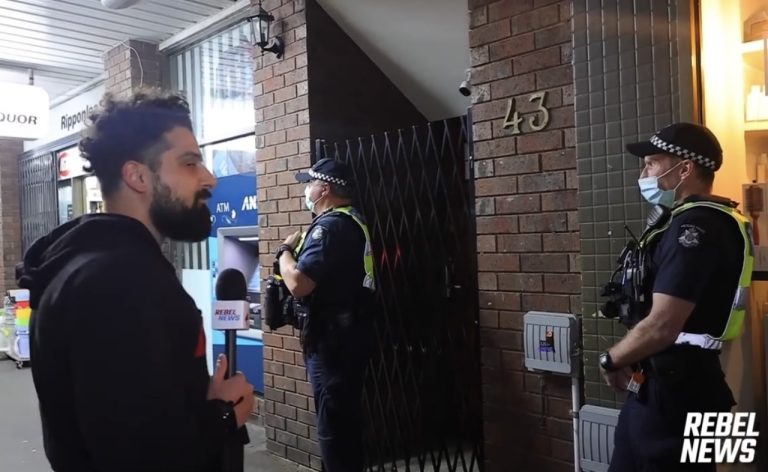 At a private event in Texas this weekend, Katie Hopkins told an audience that Australia is the “darkest place on earth right now.”

At UTT, we tend to agree.

Those who follow the goings on in Australia, as well as people like Avi Yemini of Rebel News know the tyranny and blatant evil that is being imposed on the people of Australia by their government.

Citizens must be in their homes by 9 pm, never more than 5 kilometers from home, and always wearing a mask or risk arrest.

The utter disregard for liberty and the overt oppression is shocking, especially in a place like Australia.

During this year’s Rosh Hoshanah celebration in Melbourne, a Jewish synagogue was surrounded by police to keep the Jewish population from worshipping.

When was the last time police surrounded a synagogue to keep Jews from worshipping?

Katie Hopkins points out that she was invited to Australia to participate in a reality television show while 35,000 people are still separated from their families because of the draconian measures enforced in Australia.

When she arrived in Australia, she was escorted by police and military officers to her hotel where she was not allowed to leave, make outgoing calls, and had to wait 30 seconds before opening her door to pick up her food.

When Hopkins joked she was going to answer her hotel room door naked to freak out the gestapo, she was hauled out of her room by numerous HAZMAT suit-wearing police and military personnel, treated like a criminal, and deported.

See how ABC news reported this event and you may gain some insight.

This is the state of affairs in Australia.

Tyranny and oppression are rolling across the world, but nowhere is it more pronounced in the West than in Australia.

Why is this happening in Australia and why is it happening so fast?

Reducing the citizens’ ability to defend themselves, undermining the foundations of society holding it together, and creating a “solving” a “crisis” while reducing liberty, are all a part of this effort.

Now, Stalinesque police and military personnel in Australia – some of whom openly say they disagree with the lockdowns, but are “just doing their job” reminiscent of nazi gate guards – are the oppressors ushering in an the era of slavery in Australia.

Who is behind all this?

With the proximity of China, it is not a hard stretch to see Australia may be in China’s sites.

For citizens, the answer in Australia is the same it is in Europe and the United States.

Citizens must resist tyranny and defend liberty at all costs.

For those in America who think all of the negative and corrupt happenings in the U.S. are all coincidence, look no further than Europe and Australia to see the oppression and tyranny that is happening in real time.

Katie Hopkins came to America to warn us to salvage the last best home for mankind on earth – America. If, as many are saying, America is under attack from a communist revolution, the time to act is now.